Right before the bombs rained down, a Russian general arrived in Baghdad warned the U.S. military planners to keep America’s own warplanes out of the way. U.S. officials said they would not alter their flight plans.

This is the beginning of a dangerous new phase of the international intervention in the Syrian civil war. Not only has Russia tried to order U.S. forces to step aside, it actually has the firepower to back up its demands. Some of the 35 warplanes Russia has deployed to Syria are specifically designed for fighting foes like the United States, not ISIS.

Seemingly out of nowhere on Sept. 21, they appeared at an air base in Latakia, a regime stronghold in western Syria—28 of the Russian air force’s best warplanes, including four Su-30 fighters and a number of Su-25 attack planes and Su-24 bombers.

Soon six more Su-34 bombers and at least one Il-20 spy plane followed, part of a contingent of Russia forces reportedly including some 500 troops plus armored vehicles and SA-15 and SA-22 surface-to-air missiles.

For U.S. and allied officials observing the deployment, there has been plenty of cause for confusion…and alarm. It’s not just that, more than four years into Syria’s bloody civil war, Russia has decided to jump in and make things more complicated.

No, it’s what kinds of weapons—planes and missiles, especially—Moscow decided to send, and what those weapons say about the Kremlin’s ultimate plan in Syria. Many of them don’t seem to be well-suited to fighting ISIS. They’re built to battle adversaries like the United States.

To be clear, 35 warplanes and a few surface-to-air missiles aren’t a lot in the grand scheme of things. There’s no shortage of military aircraft flying over Syria five years into the country’s bloody civil war.

Every day some of Syria’s aging Soviet-made planes —from the 300 or so that have survived four years of combat—take off from regime airfields to bomb ISIS militants and secular rebels slowly advancing on Syria’s main population centers.

Meanwhile hundreds of jets from the American-led international coalition have been waging, since the fall of 2014, an intensive air campaign against ISIS and al Qaeda targeting just the militants.

What’s weird and alarming about the Russian contingent is that it’s not really optimal for attacking lightly armed insurgent fighters. Surface-to-air missiles are only good for destroying enemy aircraft, which Syrian rebels do not possess. And the Su-30s are best suited for tangling with other high-tech forces.

Who in region possesses these high-tech forces? The United States, for one. Israel, too. Why, the United States, of course. Russia’s warplanes and missiles in Syria could pose a threat to America’s own aircraft flying over the country—all in order to carve out and preserve a portion of Syria that the United States can’t touch.

Russia’s warplanes and missiles in Syria could pose a threat to America’s own aircraft flying over the country—all in order to carve out and preserve a portion of Syria that the United States can’t touch.

“There is no other way to settle the Syrian conflict other than by strengthening the existing legitimate government agencies, support them in their fight against terrorism,” Russian President Vladimir Putin said in an interview with American news networks ahead of his Sept. 28 meeting with President Obama at the United Nations in New York City.

“There are more than 2,000 militants in Syria from the former Soviet Union,” Putin said. “Instead of waiting for them to return home we should help President al-Assad fight them there, in Syria.” 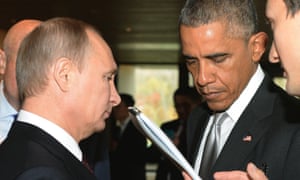 The deployment of Russian troops in Syria could end up helping Islamic State as they have been sent to areas where they are most likely to fight other groups opposed to Isis, according to a new report.

The Royal United Services Institute (Rusi) report comes ahead of a US-Russian summit meeting at the UN on Monday, when Barack Obama will question Vladimir Putin on the intention behind Russia’s deepening military involvement in Syria, according to US officials.

The Iranian president, Hassan Rouhani – also in New York for the UN general assembly meeting – rejected suggestions that his country was operating in concert with Russia against Isis. “I do not see a coalition between Iran and Russia on fighting terrorism in Syria,” Rouhani said.

The Rusi report, titled Inherently Unresolved, assesses the global effort to counter the spread of Isis, and warns that Iraq and Syria may not survive as unitary states. It includes a section on Russian aims, particularly those underpinning Putin’s despatch this month of warplanes and troops to Tartus and Latakia in support of Bashar al-Assad’s regime.

Igor Sutyagin, a Russian strategic analyst, said there was an air regiment at Latakia with 28 planes, a battalion of motorised infantry and military engineers as well as a marine battalion at the naval base in Tartus.

The deployment, Sutyagin said, “underlines the contradictions of the Kremlin’s policy”, because the troops were in areas where Isis is not present.

“In this way, Russian troops are backing Assad in the fight against groups such as Jabhat al-Nusra and Ahrar al-Sham, which are themselves opposed to Isis. If Russian troops do eventually join combat, therefore, they would also – technically – be assisting Isis,” Sutyagin argued. 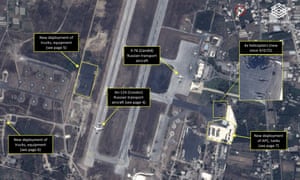 The report says the Russian deployment should not therefore be seen as a change of policy towards fighting Isis directly, but a largely political move designed to save Assad and consolidate Russia’s hold over its naval base at Tartus and its newly built air base in Latakia, while currying favour with the west and the Gulf Arab states who are themselves reluctant to fight Isis on the ground.

“Indeed, the Kremlin may well be hoping that the west will show its appreciation by lifting the sanctions imposed in response to the situation in Ukraine,” Sutyagin said.

The tensions hanging over the Obama-Putin meeting on Monday were highlighted by discord between Washington and Moscow in describing the summit. US officials said it had been requested by Putin. A Russian spokesman insisted it was Obama who asked to meet. The White House said the meeting would address both the conflicts in Ukraine and Syria. The Kremlin said Ukraine would only be raised “if there was time”.

Celeste Wallander, the White House National Security Council’s senior director for Russia, said that Obama would press Putin on his objectives in Syria. Putin meanwhile told CBS News: “There is no other solution to the Syrian crisis than strengthening the effective government structures and rendering them help in fighting terrorism. But at the same time, urging them to engage in positive dialogue with the rational opposition and conduct reform.”

The White House argues that the Russian strategy of entrenching Assad will only serve to deepen the roots of extremism in Syria. Ben Rhodes, a White House spokesman, said that at the UN meeting “the president will have the opportunity to make clear to President Putin that we share the determination to counter Isil [Isis], that we welcome constructive contributions to counter Isil. But at the same time, we believe that one of the principal motivating factors for people who are fighting with Isil is the Assad regime.”

The Rusi report said that it would be “perfectly feasible” to defeat Isis if Turkey and Iran were also engaged in the search for a regional solution. It advised US policymakers to “not give up on the possibility of maintaining the unity of Iraq and Syria, but not be beholden or obsessed with this idea either”.

“If the US could ‘father’ two brand-new states in the Balkans during the 1990s, there is no reason why Washington should not tolerate at least the informal emergence of new states in the Middle East,” the report argued.